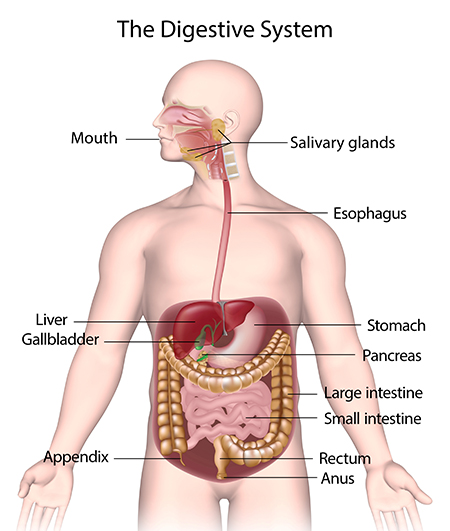 Recently I received a call from a patient who said that she thought she had SIBO and that her doctor was unwilling to make a diagnosis through the HYDROGEN/ METHANE BREATH TEST.  Instead he gave her a THREE day supply of antibiotics. Her situation prompted me to write a bit about SIBO.

One of the major culprits is the over use of ANTI-ACID MEDICATION which lowers the acidic medium in the stomach. Bacteria that would have been knocked out in the stomach by natural acid are now alive and well on its way to colonize the Small Intestines. With nearly 60 % of the population on anti-acids it is no wonder SIBO is so prevalent. A Meta-Analysis of the literature (PUB-MED) has shown that approximately 56% of people with irritable bowel syndrome have SIBO. Symptoms of SIBO are abdominal distension after consumption of fiber, starches, sugars, and after certain probiotics.

Another underlying cause of SIBO is thought to be a deficiency in the “Migrating Motor Complex” (MMC), which normally moves bacteria down from the Small to the Large Intestines.  This should normally happen at night and between meals. If the bacteria are not moving downward or in some case bacteria from the large intestine are migrating upward, bacterial over growth can occur. Treatment for a slow MMC would the use of “Prokinetics” medication and Herbal Remedies to increase the motility. (See suggestions below)

HOW TO TEST FOR SIBO:

Testing is best accomplished by both a HYDROGEN/ METHANE BREATH TEST which your doctor can order. It is non-invasive and a relatively inexpensive test.  Treatment duration is based on the elevation of gases found and falls somewhere between 4 – 12 weeks.  After the treatment protocol is complete it is advised to wait two weeks and retest for relapse if there are still symptoms.

HOW TO TREAT FOR SIBO:

DIET: The corner stone is to “feed the person and starve the bacteria”. Since the bacteria feed off of CARBOHYDRATES, diets with low CARBOHYDRATES are essential to change the environment and reduce the bacterial load. Both Dr. Alison Siebecker a Naturopathic Physician and Cedar Sinai-Medical Center (Dr. Pimential) have extensive information on Diet and SIBO online

In GENERAL the BEST DIETS are the SPECIFIC CARBOHYDRATE DIET (SCD) and the GUT AND PSYCHOLOGY (GAPS) along with LOW FOODMAP DIET  (LED) and a PALEO DIET. All of these diets aim at reducing the sugars produced from the digestion of Carbs and have about a  75% success rate. See SIBO SPECIFIC DIET: FOOD GUIDE.

The antibiotic RIFAXIMIM is the treatment of choice for SIBO. See ANTIBIOTIC TREATMENT.

HERBAL REMEDIES like pharmaceuticals attack the bacterial overgrowth and have proved equivalent to antibiotic usage. A multi-centered study including John Hopkins Medical Center found; “Herbal therapy is equivalent to Rifaximim for the treatment  of SIBO”  (vol 3, number 3. May 2014 ww.gahmj.com) The list of herbal and microbial remedies is diverse and should be tailored to the patient and their condition.  See HERBAL PROTOCOLS.

DIGESTION: Since Bacterial overgrowth is associated with low stomach acid and impaired production of digestive enzymes it is recommended to add in a DIGESTIVE ENZYME FORMULA WITH HCl. On occasion I have seen some patients unable to tolerate enzymes and on that occasion a straight HCl or Pancreatic enzyme works best. OX BILE should also be considered in patient that have had their Gall Bladder removed or have trouble digesting and absorbing fat. Remember, if you are eating less carbs and more protein and fats, you NEED to digest fats for energy!

**Spacing meals 4-5 hours apart is imperative to allow the “MMC” to occur and get stronger. Only water should be ingested between meals**

By the time we are an adult we may have experienced a life time of poor diet, food allergies, antibiotics, infections, unhealthy lifestyle, eating in a hurry without properly digestion, addictions to sugar, alcohol, caffeine,  pharmaceutical and recreational drugs, etc. What got us here may take a while to clean up!

SIBO can RELAPSE because the underlying causes are not eradicated, due to the following:

Treatments for SIBO can be quite involved, nuanced and takes several months of trial and error before the right combinations are found. For instance as probiotics are increased there may be more symptoms and dosing may have to be lowered or stopped temporarily. Retesting may have to be done several times. No two people are the same and no single SIBO diet is the best for everyone. In addition there are many more products used with success by practitioners and patients alike, this article serves only as a basic guide to some key points for SIBO.